Following overwhelming ratification by its 1,900 members and approval today by Winnipeg City Council, a new five-year collective bargaining agreement is now in place for the members of the Winnipeg Police Association (WPA). This agreement provides for wages and benefits that recognize and reflect the unique and challenging job WPA members do every day to keep Winnipeg families safe, and presents a sustainable cost structure for the City of Winnipeg, as acknowledged today by the Mayor and members of City Council.

WINNIPEG, MB - MAY 12, 2017: As plans take shape to alter policies around the safe and secure management of intoxicated persons in Winnipeg’s downtown, the Winnipeg Police Association (WPA) wants to ensure any changes put public safety first and do not just focus on cutting costs, said Maurice (Moe) Sabourin, President, WPA.

WINNIPEG, MB - MAY 5, 2017 – Internal communications to Winnipeg Police Service (WPS) members show cuts to the training budget have reduced the ability for members serving in the WPS Specialized Investigation Division to attend a conference on missing and exploited children taking place right here in Winnipeg.

Thank you to the hard working

WINNIPEG, MB: More than 1.2 million men in Canada have prostate cancer and 80 per cent of them don’t know it. Today, the Telus Manitoba Motorcycle Ride for Dad (MRFD) launched its 9th annual fundraising and awareness campaign.

Did you know that Winnipeg is home to the longest running annual charity function of its kind in North America? It’s the Winnipeg Police Association (WPA) Charity Ball in support of the Children’s Hospital Foundation of Manitoba.

“The Children’s Hospital Foundation has been one of the WPA’s favourite charities of choice for over 25 years,” said Maurice (Moe) Sabourin, President of the Winnipeg Police Association. “It’s an ingrained trait within police officers that you try to help the less fortunate and most vulnerable of society, and children are the most vulnerable. We feel it’s our community responsibility to be involved and provide money to the Children’s Hospital.”

“For over 25 years, members of the Winnipeg Police Association have consistently supported the Children’s Hospital Foundation of Manitoba,” says Tanya Williams, Director of Communications, Children’s Hospital Foundation. “To date, the WPA has raised over half a million dollars and supported over 3 million visits to the hospital. They have helped save the lives of over 3 million children. It’s a remarkable accomplishment and we could not be more grateful.”
Gratitude is abundant during the Ball, which is a night of giving and fun.

“The evening is always a great time,” says Moe. “We get to hear from each year’s Champion Child, which is always a highlight. The kids share their story which gives the guests a real understanding of what Children’s Hospital is all about. We have a fabulous dinner and some dancing, as well as a performance by the Police Pipe Band. There’s a silent auction and a 50-50 with all of the proceeds going to Children’s Hospital. We really try to focus on the charity and encourage everyone to be generous, as their support affects children and their treatment.”

The Children’s Hospital touches a large portion of the population which makes it easy for the WPA to offer their support, but for some it’s even more personal.

“My child had a kidney removed when he was 18 months,” recalls Moe, “and the Children’s Hospital is very special to my heart. As Winnipeggers I think we are all generous when it comes to taking care of our communities. The citizens of Winnipeg are pretty amazing.

”Just as amazing is the WPA and their commitment to helping sick kids feel better. 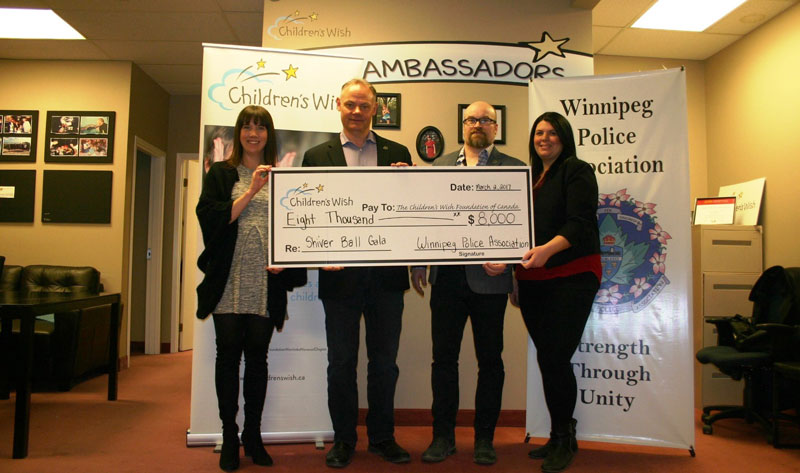 WINNIPEG, MB:  The Winnipeg Police Association (WPA) has a long history of supporting the Cops For Kids bike relay team in their efforts to raise money for the Children's Wish Foundation. The 2016 relay team consisted of 16 WPA members who pedaled 1,500 km from Winnipeg to Chicago to raise money to grant two young boys’ wishes and was the 11th year Cops for Kids completed a ride raising money for the Children's Wish Foundation. The 2016 Cops for Kids relay team raised $24,000 bringing the 11-year total to $480,000.  “

Winnipeg, MB, March 2, 2017: The Winnipeg Police Association is now the presenting partner of the Winnipeg Youth Football Club, a weekly after-school flag football program for youth in Winnipeg’s core area that has taken place each winter for the last four years.